Today we celebrate the 16th birthday of the iconic, ‘Oops!… I did it again.’ 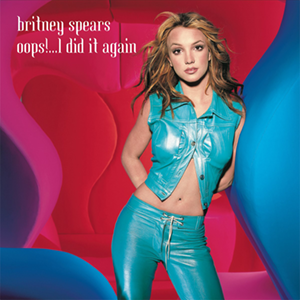 The video was considered Britney’s first approach to a ‘racier’ image by critics. During this time, it was claimed that Britney was a virgin and critics used this video to question the authenticity of the claim.

The video was filmed by Nigel Dick who had worked with Britney on numerous videos at this point, with ‘…Baby One More Time’ being one of them. The video was shot between the 17th and 18th of March.

The CD single is the one with the most remix versions and most are extremely rare.

During the production, one of the cameras fell and hit Britney on the head. Britney received four stitches however continued to film the remainder of the video with only 4 hours rest.

Britney came up with the entire video concept. She wanted the video to take place on Mars and she wanted to go with the red cat suit look. The final choices were between a red or a black cat suit and Britney preferred the red one. The video premiered on MTV’s making the video on the 10th April 2000. ‘I want to be in a red jumpsuit. I want to have a really cute spaceman, but there can’t be any rockets’ said Brit. Nigel Dick also commented on Britney’s choice of outfit: ‘There was another cat suit actually, which was fantastic, which I loved, and the night before, I was told that Britney hired this guy that worked with Michael Jackson and so we’re going to use that cat suit. So that’s the cat suit.’ The cat suit was so tight, Britney needed to use powder to slide into the suit and also to avoid sticking to the suit (it was extremely hot and sweaty).

There was also a behind the scenes from Felicia’s perspective.

The video is one of her most iconic, however lost out to 4 Awards (she received 4 nominations) at The MTV Video Music Awards. The song also lost out to a Grammy and also to the Kid’s Choice Awards 2001 (She lost out to the Baha Men – ‘Who Let The Dogs Out’ – believe it or not!). Loosing out to all the wards created outrage – especially as she lost out to many one hit wonders.

The video was filmed on the same soundstage as Jurassic Park and Pirates of The Caribbean.

Eli Swanson who plays the astronaut, traded in his Space Suit for some scrubs. He is now a qualified surgeon… see the full article HERE.

A record of 155 radio stations added the song to their playlists in the first week of the songs release. This reflects the hype around the single.

There was a lot of rumours about breast implants when the video came out, this was later proven to be false and a case of padding in the cat suit. Britney requested the padding as she felt the tight cat suit, made her look flat. A radio station in Scranton, Pennsylvania even went as far as to create a parody of the song called, ‘Oops! They Deflated Again.’ The comedy in the track was seriously poor and failed to be funny, so instead of posting the lame attempt at humour, let’s rather look at this hilarious clip of the song with no music instead… this one is actually funny.

There were articles around the time claiming that the song was a diss to her previous girl band, ‘Innocence,’ by using the line, ‘I’m not that innocent.’ The people writing the articles clearly did not listen to the lyrics of the song and their claims made no sense whatsoever…

If you watch the scenes of Britney in white on the floor – when Britney sings, ‘I cry watching the days,’ one of the dancers messes up the dance routine (look top left)..

Everyone knows that the dialogue, ‘…but I thought the old lady dropped it into the ocean in the end,’ was a nod to Titanic, right? Max Martin confirmed that this was due to a personal inside joke they had about the box office smash.

The man talking in the song, is in fact Max Martin himself.

Britney famously performed the song at the VMA Video Music Awards in 2000, in a nude outfit that caused outrage with parents. Britney brilliantly responded with, ‘I am not the kids parents, I can’t tell them what to do. I just go up and do my thing.’

In the 2002 Austin Powers: Goldmember movie, Austin blows up a fembot Britney and references the famous song lyrics, ’Oops!… I Did It Again.’

The filming of the video can be accessed on the Greatest Hits DVD: My Prerogative. Have a look at the video comparisons here:

Let’s celebrate this milestone by watching the video, which is almost VEVO certified:

And catch up on some of her iconic performances:

June 26 – Britney taking selfies with Sam on their hotel balcony in Hawaii!

Britney posted her first selfie of 2016!