Welcome back to another week of Planet Britney, where we summarize all things Britney related from last week into one easy and simple post, perfect for those of you who just simply do not have the time to catch up on Britney news every single day.

‘Piece Of Me,’ is on a break! Britney completed the final performance of this leg to a sell out crowd and as per usual she slayed!

Britney will be taking an 8 week break before her next leg kicks off, however if the rumors are to be true, this might not be much of a break.. but we will have to wait and see…our nerves are shattered…

Las Vegas!! Thank you for another amazing set of shows… see you in June ❤️ #PieceOfMe pic.twitter.com/3PnA1V6Q8X

The most epic moment of this leg? Well for us it was this endearing proposal…

Like come on! Do proposals get any better than this? Courtney, you are one lucky lady! Thank you for sharing your story exclusively with us guys! We have been seeing these pics everywhere, so happy for you!

Another week another celebrity shows some love to the Queen Of Pop. We start off with none other than Meghan Trainor who just last week had nothing but nice things to say about B. Turns out Meghan is just like us, once we start, we can never stop talking about Brit either. 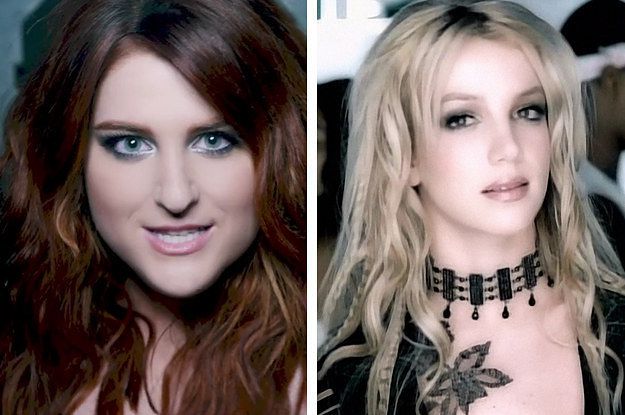 We’re both ‘90s babies, which is probably why I can’t stop bumping to “Nø.” What were your favorite moments from that era?
My family wasn’t into every award show, but I would make sure we popped it on when Britney was on! She was my queen, and Christina Aguilera too. *NYSNC was huge for our family. My brothers would dance in front of the TV just to be like them, and I would sit there and laugh because I was too embarrassed to dance. I swear I learned how to harmonize because of *NSYNC. I remember singing along with my headphones on and my brothers would be like, “You’re singing it wrong!”

I wrote an article last month about this awesome “Nø” mash-up with Britney Spears’ “Overprotected.” Have you seen it?
Of course, I’ve been bumping it. I love it! I freaked out when I saw it, that’s like my dream. God, I want to meet her so bad and just tell her that she’s my everything.

Meghan, we would give anything to go back to those days! The best time of our lives! It seems like Ariana Grande also shares our flawless taste in music:

Also making headlines this week is the hilarious, ‘Lip Sync Battle.’ Clark Gregg joins the list of celebs who have imitated Brit on the show. We are digging the outfit!!

The Fifth Harmony girls paid Brit a visit too this week! The girls have come so far from their XFactor days, they are almost unrecognizable! With Camila unable to attend, Britney completed the five piece girl band with this slick pic:

you went innnn tonight @britneyspears 🌙⭐️🌹 thanks for having us babe. pic.twitter.com/Q3U5mQ3kgH

Talking about ‘Piece Of Me,’ one of our favorite icons, Demi Moore not only came to see Brit perform, but brought the house down with her sexy dance moves, check this out:

And last but not least, Sky Ferrier mentioned Britney in a recent interview with People magazine:

The then 7-year-old was at Neverland Ranch when Jackson invited her to ‘sing whatever you really want!’ “I was sitting in the movie theatre and I [decided to perform] Britney Spears‘ “Lucky” for him!”

Cringing as she recalls the memory, “I also did the talking part in the beginning – the whole entire thing!”

Can you imagine singing a Britney track to Michael Jackson?!? Total freak out!

A DAY IN THE LIFE

Okay, you need to agree that when it comes to social media and letting us into their world, Britney is by far the best! What has Brit been up to this week? Let’s have a look:

Brit popped online for a quick ‘hello’ selfie on Sunday:

A pink Monday – which included a ‘fave’ from Lady Gaga on Twitter. We take it on Monday’s pink is now compulsory? The Queens have spoken:

When your damn dog eats all the cheese 😭 @hannahspears pic.twitter.com/dxbyXO9BC3

We do not blame you Hannah! We love cheese too! Then we had the all important family dinners:

And some Michael Jackson love:

At it again… Having more fun than my kids lol pic.twitter.com/3EnU15u9zc

Listening to the best! #MichaelJackson pic.twitter.com/JDBMEEo4Kh

We think a carpool Karaoke with James is in order! Bring it on!

We end off this week with the extremely sad news of Prince’s passing. Prince was an icon and his contribution towards music is second bar none. Your legend will live on forever.

Here's to one of the strongest spirits the world has ever known 🌹 We will miss you forever, Prince. pic.twitter.com/vEGAd0HLxS

Prince, thank you for the music and may you rest in peace. Unfortunately Prince never released his material on Youtube, so we are unable to leave you with Britney’s favorite Prince song, Kiss. We do however have an unreleased Britney version of the track for you to enjoy below:

This makes us super sad, what a mastermind. That is all for this week y’all. We will be listening to Prince and celebrating the legend all week here at HQ’s. See you all next week.

July 4 – Britney Enjoying Her Second Day In Disneyland With Her Boys!